GOD is not found in the original Hebrew text!

Genesis 1:1 אֱלֹהִ֑ים for ’ĕ·lō·hîm in modern Hebrew. See definition of "EL" as to why it is not used in these scriptures.

God= Is not His name! Ahla-Hayam is a proper term in Paleo Hebrew

Neither is the term "GOD" free from heathen trappings. Paul wrote that there are "gods many and lords many" (1 Corinthians 8:5 KJV). One root of "God" means "to pour as in a molten image" (Oxford English Dictionary). No wonder idols are known as Gods.

“God” is from the ancient root gheu, which means to pour, as in a molten image. See Oxford English Dictionary and Encyclopedia Britannica, 11th edition, under “God.”

In the Book of Enoch 69:6, Satan's hidden name is "Gadreel," and the short of that name would be "Gad" The letter "A" in Aramaic/Hebrew, is always pronounced "ahh," so "Gad" pronounces as "God." See what's been going on? Satan is crafty, isn't he, getting you to worship him!

Gad is a Syrian or Canaanite deity of good luck or fortune. Written in Hebrew, it is GD, but with Massoretic vowel-pointing, it gives us "Gad." Other Scriptural references to a similar deity, also written GD, have a vowel-pointing giving us "Gawd" or "God." Jupiter, the Sky-deity or the Sun-deity, is known as Gad.

A substitute for the Tetragrammaton (YHVH=Satan), the word "God (or god)" is a title, translating from the Hebrew Elohim=Demon, El (or el), and Eloah.

According to Encyclopaedia Britannica, GOD is the common Teutonic word for a personal object of religious worship, applied to all the superhuman beings of the heathen mythologies. The name of the One Supreme Being on the conversion of the Teutonic races to Christianity adopted is the term "God." Encyclopedia of Religion and Ethics and Webster's Twentieth Century Dictionary, Unabridged agree that the origin is Teutonic paganism.

In Indo-Germanic dictionaries, the word ghodh pronounces the same as "God." This word means union, also sexual union or mating. According to Luneburger Wörterbuch, the following are the same word: Gott, got, gode, gade, god and guth (gud).

2 Corinthians 4:4 (YASAT) (Satan), who is the GOD of this world hath blinded the minds of them which believe not, lest the light of the glorious gospel of Mashi'aH, who is the image of 𐤀𐤄𐤉𐤄 A'HâYâH, should shine unto them.

1 Corinthians 8:5 “For though there be that are called gods, whether in heaven or in earth, (as there be gods many, and lords many,)”

Psalm 82:6 I have said, Ye are gods; and all of you are children of the most High. 7But ye shall die like men, And fall like one of the princes.

One tribe of the 12 tribes of Israel (Yasharahla) pops out of my mind! How about the tribe of Gad? Is there or is there any connection with that tribe to Satan?

A tribe is not SATAN, Gad (Hebrew: גָּד, Modern: Gad, Tiberian: Gāḏ, " luck " ) was, according to the Book of Genesis, the first son of Jacob and Zilpah, the seventh of Jacob overall, and the founder of the Israelite Tribe of Gad.

The real creator is Ahayah, not God! 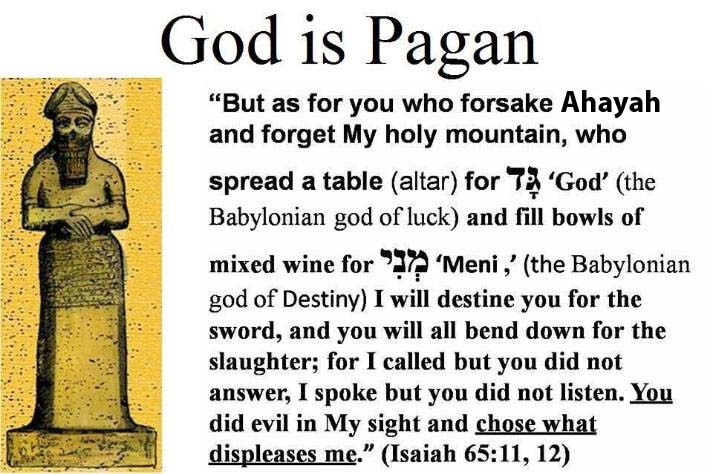 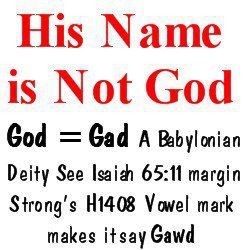