URIM and the THUMMIM (Aleph and Tav) את 𐤀𐤕 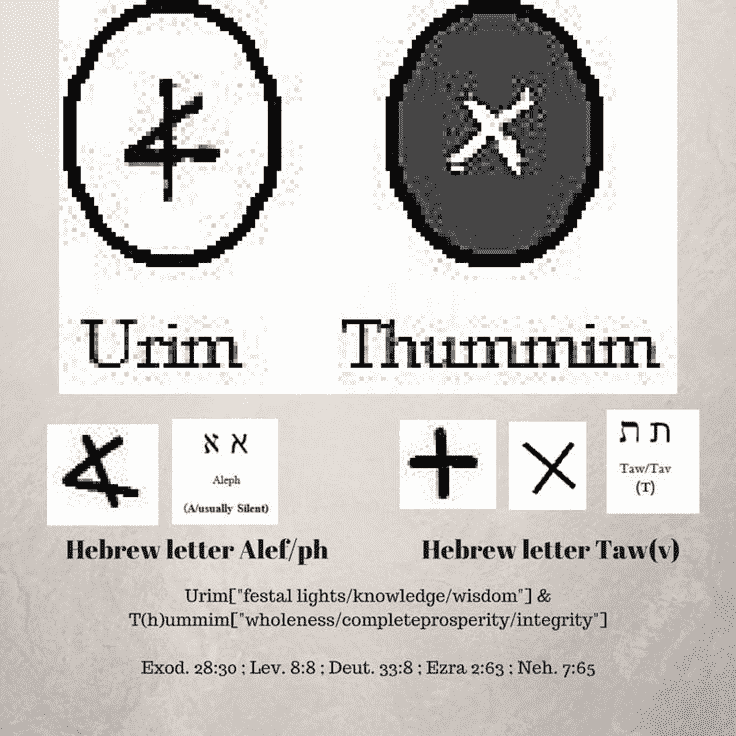 “Also put the Urim and the Thummin in the breastpiece, so they may be over Aaron’s heart whenever he enters the presence of the Lord. Thus Aaron will always bear the means of making decisions for the Israelites over his heart before the Lord.”-Exodus 28:30 The URIM and THUMMIM were two stones, one white and one black, that would give a yes or no answer to a specific question. For instance, should Israel be preparing for battle, they would shake and toss the stones. If the stones turned up black, the Israelites would NOT go into battle, but if they turned up white, Israel would proceed into battle with the full confidence that they were in the will of the Father. URIM and THUMMIM appear to be the only form of divination A'HâYâH allowed the Israelites to practice. Urim means "light" and THUMMIM means "perfection". The names, Urim and Thummin, meant ARM and HAMMER. The leader of Yasharahla (Israel) is the constructive Arm of God. The leader of Babylon is the destructive Arm of God, who is represented as the Hammer of God. The words, Urim and Thummin, have phonetic similarities to the objects they represent. Urim sounds like Arm. Hammers make a thumping sound. In the New Testament, one of the titles the Mashi'aH 𐤉𐤔𐤏 Yâsha' is given is “the Alpha and the Omega” or "Aleph and Tav" 𐤀𐤕 as found in the Peshitta. It begins right here in Exodus because the first letter of URIM is ALEPH, which is the first letter of the Hebrew alphabet. And the first letter of THUMMIM is TAV, which is the last letter of the Hebrew alphabet.